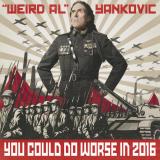 Can hear those 90,000 pounds of Dolby sound
Original Lyrics:
Everybody in the town

and he hacks up two or three in every scene.
Original Lyrics:
There's a homicidal maniac who finds a cub-scout troop

and he hacks up two or three in every scene.
Submitted by: Jeff
There are additional parody fragments available.

"Weird Al jaenjkevik
Better on Wikipedia
Submitted by: Zakery "The Weird Man" Wood
"Weird Al Yank-oh-vick
Just wanting to clear up that it's "vick", not "vitch."
Submitted by: Jonathan S.

"Wanna B Ur Lovr" Length: 6:14
I was amazed when I found out that this song from Poodle Hat was that lengthy. It doesn't feel long at all! - On a side note, Al described the musical style on this one as him "trying to sound like Beck trying to sound like Prince."
Submitted by: Jonathan S.
"Albuquerque" Length: 11:25
It's only technically a song, but it's really a long rant/monolouge set to music. Oh, and it includes weasles.
Submitted by: kaosblaze
"Trapped in the Drive-Thru" Length: 10:51
Submitted by: Jake
"Genius In France" Length: 8:56
Submitted by: Jake
"Peter And The Wolf" Length: 27:50
I'M SERIOUS!!!! The track REALLY is that long! See, Al did a, shall we say, "reworking" of the classic children's story, complete with a minor musical number every minute or so. NOT as long as the solos for tracks like "In-A-Gadda-Da-Vida," mind you, but enough to stretch out the story to nearly half-an-hour. (From the album "Peter And The Wolf")
Submitted by: Jonathan S.

"Amish Paradise"
A classic case of misunderstanding: Coolio's label gave Yankovic the impression that Coolio had granted permission to record the parody, but Coolio maintains that he never did. While Coolio claimed he was upset, legal action never materialized, and Coolio accepted royalty payments for the song. After this controversy, Yankovic has always made sure to speak directly with the artist of every song he parodied. At the XM Satellite Radio booth at the 2006 Consumer Electronics Show Yankovic and Coolio made peace. On his website, Yankovic wrote of this event, "I don't remember what we said to each other exactly, but it was all very friendly. I doubt I'll be invited to Coolio's next birthday party, but at least I can stop wearing that bulletproof vest to the mall." In an interview in 2014, Coolio extended his apology for refusing his permission, stating that at the time "I was being cocky and sh*t and being stupid and I was wrong and I should've embraced that sh*t and went with it", and that he considered Yankovic's parody "actually funny as sh*t." (from Wikipedia)
Submitted by: PJ
"Amish Paradise"
I do not know all the details about this lawsuit but I do know that Coolio sued Weird Al for making a parody of his song, "Gangster's Paradise".
Submitted by: UDon'tNeedToKnow1024

"Bite Me"
This song is at the end of 'Off the Deep End' and after 10 minutes of silence, you will hear utter nonsense that may scare you.
Submitted by: Paul Warren
"You Don't Love Me Anymore"
After the song is over, there is nearly 20 minutes of silence, followed by about 10 seconds of formless guitar, drums and screaming. This is a spoof of the hidden track from Nirvana's Nevermind album called "Endless Nameless".
Submitted by: Agrimorfee

"I Remember Larry"
Around 3:10 on the song, is a backwards message. Played backwards, you hear Al tell you "Wow, you must have an awful lot of free time on your hands"
Submitted by: Ra'akone
"Weird Al Yankovic"
Look on the inner groove of the vinyl LP version. You'll find the words: "Don't forget to eat your broccoli!"
Submitted by: Agrimorfee

"Nature Trail To Hell"
Forwards, its complete gibberish. Backwards, you get "Satan Eats Cheese Whiz"
Submitted by: Mike
"Ebay"
In part of the song, you can hear in a voice that sounds very similar to Wierd Al's saying, "He was watching Star Wars."
Submitted by: Rachel
"I Remember Larry"
In the part (near the end) when you hear "Yes I remember remember remember" over and over again, you hear Al sing what sounds like gibberish, and this gibberish is clear. If you play it backwards, this gibberish says, "Wow, you must have an awful lot of free time on your hands"
Submitted by: Lucas
"Nature Trail To Hell"
During the instrumental part with the wailing, Al says somethin' that sounds like "Zoon eech hoo zitz." If you play it backwards, it's supposed to say "Satan eats Cheeze Whiz." No doubt Al's way of poking fun at the "satanic back-masking" trend.
Submitted by: Jonathan s.

"His unusual reaction to problems with a song"
When Atlantic Records didn't allow Al to release "You're Pitiful" (a cover of "You're Beautiful") on Straight Outta Lynwood, he got back in an odd way. In the video for "White and Nerdy", when he talks about editing Wikipedia, he is writing "YOU SUCK!" on Atlantic Records' page. He also would wear a similar shirt when singing "You're Pitiful" in concert.
Submitted by: JeReMy
"His Name"
Al Yankovic got his name in the mid-70's because many people would say to him "Hey, F-Ing Weird Al"! The name stuck (Not the F-ing part) and the rest is history!
Submitted by: Paul Warren