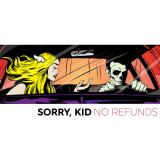 There are additional Blink 182 Combined Groups that haven't been done yet available.

"What's My Age Again?"
Not banned exactly, but the version played on the radio is severely altered.
Submitted by: G

"I'm Lost Without You" Length: 6:21
Unusually long for Blink.
Submitted by: Hawky

FAD: "Fu*k a dog"
Hopefully it won't be a new fad
Submitted by: Michael M

"Starting the random number trend"
They added the "182" because there was already a band called "Blink". Since the random number, Sum 41, Seven Mary Three, Matchbox 20, and other bands have taken control of this trend.
Submitted by: JeReMy

Enema Of The State

The Mark Tom and Travis Show (The Enema Strikes Back) Enema Of The State [EDITED VERSION] Take off Your Pants and Jacket