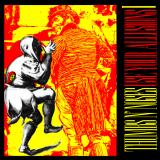 Known informally as: The Most Dangerous Band in the World. Submitted by: Robert D. Arndt Jr.

There are additional Guns 'N' Roses Combined Groups that haven't been done yet available.

"Breakdown"
Better Lyrics:
She got me aroused

So I reached inside her blouse

I told her she had rotting trim

But I hadn't canvassed her house
Original Lyrics:
But now the damage's done

And we're back out on the run

Funny how everything was roses

When we held on to the guns
Submitted by: Ed Ehren
"Mr. Brownstone "
Better Lyrics:
We've been learning, with Mr. Websley.

He's on his way to the Letter Factory.
Original Lyrics:
We've been dancing, with Mr. Brownstone.

"Get In The Ring"
In a jukebox near me, back in the early 90s, this song was banned and wasn't allowed to be played on the 'Use Your Illusion II' album as apparently it drew in complaints. So it's a small ban... but it's still a ban! And a public ban too!
Submitted by: Lee
"One In A Million"
In 1989, Guns 'N Roses are cut from the New York AIDS benefit "Rock And A Hard Place," because of the lyrics to this song.
Submitted by: Peter

"My World" Length: 1:24
The final track on "Use Your Illusion 2". Regarded as G 'n' R's worst song ever.
Submitted by: Odie Garfield

BOB: "Back Off Bitch"
Submitted by: Anonymous One

"Riot act"
Rose had pleaded innocent to four misdemeanor counts of assault and one count of property damage stemming from the riot that broke out during his July 2, 1991, concert at the Riverport Amphitheatre in Maryland Heights, just outside St. Louis. Videotape showed Rose diving into the concert crowd when he spotted someone with a camera, then punching a man. He then smashed his microphone on the stage and stormed off, ending the show early. Several thousand dollars' worth of property damage was reported by the outdoor theater from the ensuing riot. Gregory said he found that Rose was guilty of the charges "beyond a reasonable doubt." "Well, well, thanks to the lame ass security, I'm goin' home!" **BASH!**
Submitted by: Mickey D.

"Live Era '87-'93"
Look very closely at the cover, just below the 2nd poster on the top row. It says "Warning: The Surgeon General Has Determined That Hollywood Rose Is Bad For Your Health (but worth the risk)". You might need a big LP to see it because the writing is very small.
Submitted by: Lee
"Appetite For Destruction"
On the back cover of the CD version - it says, "The music on this compact digital disc was originally recorded on analog equipment. We have attempted to perserve, as closely as possible, the sound of the original recording. Because of it's high resolution, however, the compact disc can reveal limitations of the source tape."
Submitted by: Lee
"Use Your Illusion Volumes I & II"
"This album contains language which some listeners may find objectionable. They can F?!* OFF and buy something from the New Age section." Absolutely classic.
Submitted by: Jakko Wakko
"The Spaghetti Incident?"
Explicit copies after 1994 contain this warning with GNR's signature: "Chock full of unsavory subject matter and explicit language, etc. etc. etc.... so don't say we didn't warn you!"
Submitted by: Ryan Froula Use Your Illusion I