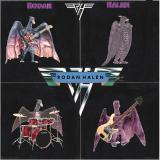 There are additional Van Halen Combined Groups that haven't been done yet available.

Ease the seat back
Submitted by: Ed Ehren
"Jump"
Better Lyrics:
Ted's fed up, with this Donald Trump clown
Fighting's been tough, but now,Trump's put his wife down
This campaign, folks, is so unreal
'Spill the beans" punches and tabloid appeal
Started Melania Trump smear
Pictured as Slovenian slut in his jet machine
British GQ mag was the means
Lyin' Ted claims sight was unseen
Blame tweets on Trump! Trump!
Heidi looks like a frump
Depression slumps. F' Trump!
Ted Cruz hates Trump!
Original Lyrics:
get up, and nothing gets me down.
You got it tough. I've seen the toughest all around.
And I know, baby, just how you feel.
You've got to roll with the punches to get to what's real
Oh can't you see me standing here,
I've got my back against the record machine
I ain't the worst that you've seen.
Oh can't you see what I mean?
Might as well jump. Jump!
Might as well jump.
Go ahead, jump. Jump!
Go ahead, jump.
Submitted by: Robert D. Arndt Jr.
"Love Walks In"
Better Lyrics:
The Deli’s rearranged
All the Wursts are changed
No sliced scraps remain,
Steph is workin’ it
Original Lyrics:
So when you sense a change
Nothing feels the same
All your dreams are strange,
Love comes walkin' in
Submitted by: Robert D. Arndt Jr.
There are additional parody fragments available.

"Pretty Woman"
One of the first videos to be banned by MTV after many complaints by parents. The video featured two midgets about to perform sex with a woman, who was actually a man in drag.
Submitted by: Wolfman Jack Nicholson

"Panama"
During December 1989 the Cold War had ended peacefully. However, Panamanian strongman Manuel Noreiga had declared that Panama and the U.S.A. were in a state of war. With the memories of the 1979-1981 Iran hostage crisis still pretty fresh and Noreiga threatening the American forces in the Canal Zone the U.S. invaded Panama. Noreiga was soon cornered and holed up in a Vatican embassy. The U.S. Army played loud music in order to have Noreiga come out and surrender. Some of the songs blasted loudly included the Animals' "We Got to Get Outta This Place" and of course, "Panama" by Van Halen. This may be the first use of rock'n'roll as a weapon of war. Manuel Noreiga surrendered to the U.S. Army on January 2, 1990.
Submitted by: Kold Warrior

"First Glam Metal band"
Van Halen, who formed in the mid-1970s, are widely considered to be the first Glam Metal band, due to the fact that they succeeded in mixing the sounds of Pop and Heavy Metal, had a virtuoso lead guitarist and a flamboyant frontman and wrote songs about Sex, Rock And Roll and just plain having a good time, which is pretty much every Glam Metal band's requirements.
Submitted by: GlamRockNinjaLord
"Not Having Brown M&Ms"
The Brown M&M never gets respect (there's no Brown M character) and Van Halen is no exception. They used this policy because they wanted to make sure that their promoters have read the contract, since in one of their venues a roadie nearly got killed and wound-up with a damage bill of 85 grand!
Submitted by: Paul Warren

Minivans
Based on their name.
Submitted by: Rocky

"Everybody Wants Some"
Richard Linklater's 2016 film
Submitted by: Sutch

The Best of Both Worlds