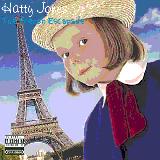 "Hollaback Girl"
How could this be not mentioned yet? This song was heavily censored in English-speaking countries and in Brazil for saying the word "shit" 38 times. I personally have heard both versions at parties.
Submitted by: dxman

"Her look"
Gwen's platinum blonde hair and red lips are what she's best known for.
Submitted by: Lexx What You Waiting For