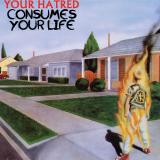 There are additional Bad Religion Combined Groups that haven't been done yet available.

"All There Is"
Better Lyrics:
This song goes out to all the homeless hobos
Living inside a box beside the Shop n’ Save
The dirty nomads, they eat breadcrumbs, not Kraft dinners
And mark signs on the sidewalk just so they can talk
And every one needs a bath, wears flannel, smells bad
They are homeless, they are dirty
Add it up, you get a hobo, or a migrant
Either term can be used
In suburbs, tell me
Are hobos all there is?
Original Lyrics:
This song goes out to all the hopeless sinners
With grave allegiances so meaningless and vain
The walking wounded, in a pageant of contenders
Who walk upon a rail of pain for just a pail of rain
And everything is barely mist, blood relations and bricks
My expression, my confession
Add it up, extract a lesson more than this
Once again, like a bullet
As a friend, tell me
Can that be all there is?
Submitted by: Iseult the Fair

"Hear It" Length: 1:49
This has to be the shortest Bad Religion song ever recorded. This song is heard in the Dreamcast version of Crazy Taxi during the cabbie/car selection screen, but you don't hear the whole song in its entirety, as you only have ten seconds to make your decision.
Submitted by: Isac

"Stranger Than Fiction"
Submitted by: Raphael The Process of Belief