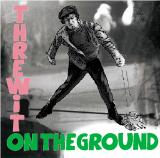 Known informally as: Only Band That Matters. Submitted by: Robert D. Arndt Jr.

Known informally as: The Only Band That Matters. Submitted by: dxman

There are additional Clash Combined Groups that haven't been done yet available.

"Bankrobber"
Banned on the BBC, presumably because of its lyrics about robbing banks
Submitted by: Ra'akone

"Train In Vain"
It is the last track on the London Calling album, and is well-known for the refrain "Stand by me". It was not intended to be a hidden track per se; it was included on the album at the last minute, after the album cover had already been designed and printed.
Submitted by: Agrimorfee

"Rock the Casbah"
In the middle of the song, you'll hear a video game beeping. It was mistaken for a cell phone, but cell phones were released 10 years after the song came out.
Submitted by: Paul Warren