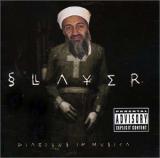 There are additional Slayer Combined Groups that haven't been done yet available.

"Most songs"
For dealing with anti-Christ, Nazism, etc in most songs.
Submitted by: Travis