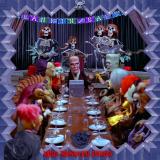 "Tender Lumplings"
This band was wackiest in its earliest days, but this barely audible tune on their last studio album sounds like a bunch of goblins whispering in an old Victrola record player. It was referenced later in Danny Elfman's score for The Nightmare Before Christmas.
Lyric: Oh listen Tender Lumplings let me take you by the hands./I'll take you from this hell-hole to the Promised Land. /But don't blame me, oh children, if those promises don't keep/'Cause promises like lives, can be bought so very cheap.
Submitted by: Agrimorfee

Best of Oingo Boingo: Skeletons in the Closet Dark at the End of the Tunnel