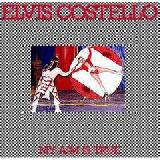 "Oliver's Army"
Banned by the BBC during the Gulf War
Submitted by: Evan

"Nearly Scotching His Career"
In March 1979 Elvis Costello was in a Holiday Inn bar in Columbus, Ohio and he was slushed big time and in an argument with Stephen Stills and Bonnie Bramlett. he referred to Ray Charles a “blind, ignorant n***er” and James Brown a “jive-ass n***er.” This got printed and his reputation was in danger. He apologized and made a lame excuse of "trying to get out of a stupid conversation". He then participated in the charity event “Rock Against Racism”, which he had done before and since. Ray Charles expressed forgiveness by saying that "drunken talk shouldn't be printed".
Submitted by: American Attraction
"Being banned from SNL"
Elvis Costello & the Attractions were banned from Saturday Night Live for 20 years for performing "Radio Radio" instead of "Less Than Zero" in a 1977 episode.
Submitted by: dxman

My Aim Is True (With Bonus Disc)

The Very Best of Elvis Costello This Year's Model (With Bonus Disc)