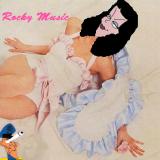 Known informally as: The Roxies. Submitted by: I Love Roxy

Known informally as: The Roxies. Submitted by: I Love Roxy

There are additional Roxy Music Combined Groups that haven't been done yet available.

"Country Life (album)"
Like nearly all Roxy Music albums, the covers feature women. The 1974 album 'Country Life' has two scantily clad German women, one in a bikini and the other topless (hands covering her breasts), This led to the album distributed in the US with the women taken off, but later releases featured the women but the album was sold in a paper bag. No matter, it sold well in the US anyway.
Submitted by: I Love Foxy Roxy Music!

"Guitar Pose Inspirations"
We all know about how Roxy Music is an inspiration for punk, new wave, alternative and indy rock in so many ways . The center gatefold spread of their 1972 self-titled debut shows all the band members holding various guitars. Front man Bryan Ferry looks like a glam rock 23rd century Elvis and the other band members were also glammed up and dressed in various exotic costumes. There have been similar album art tributes by bands inspired by Roxy. For instance, for the 1980 Cars album 'Panorama' there's a similar inner spread picture of the Cars holding various guitars. In the 2004 Duran Duran album 'Astronaut' the Fab Five members also pose for a 2-page spread in the CD booklet. They are all holding various model guitars too. The Cars and Duran Duran and many other bands are inspired by Roxy Music and this is one clear way they've shown it!
Submitted by: I Love Foxy Roxy Music!

"Ladies on Albums"
Every album that Roxy Music has released, there was a lady on it...even "Avalon" has a lady on it dressed as King Arthur.
Submitted by: Paul Warren The Best of Roxy Music