"Out for Good" by The ISOlators
a parody of "Hurts so good" by John Mellencamp
Melbourne has been locked down more than any other city on earth! Let's hope this time the city is allowed "Out for Good"
youtube: (MP3)
(Leave a Comment)

There are additional John Mellencamp Combined Groups that haven't been done yet available.

Conman, Jell Hemp Submitted by: Oliver South
Kinda lame, I know. But it's the best I can do.
Hmm, No Pecan Jell Submitted by: Josh

"Mr. Happy Go Lucky (album)"
Stupidity strikes again! Some stores (like Wal-Mart) would sell only copies of this album where the Jesus and Satan images were airbrushed off on the cover art. Mellencamp was getting more outspoken about his disputes with his record label execs. The next year a hits compilation was released and John's contract was fulfilled. Then he was free to find a new label.
Submitted by: Naked Dancer
"Dance Naked (album)"
The cover art for this album featured a pale wax dummy figure sitting on a log, wrapped in barbed wire with its right arm raised up in a gesture of defiance. Some stores sold copies that had the cover image festooned with black rectangles with red X's on them. It was the summer of 1994, the Cold War was over and yet some neanderthals in America were imposing outright censorship on us. No lame excuse was ever given for that. John was having some disputes with his record label and maybe the suits did this to "get back" at him. Stupid stupid stupid.
Submitted by: Naked Dancer
"Play Guitar"
On the edited version played locally, the word "s***" is played backwards so that it sounds like "dish".
Submitted by: Rocky
"Uh-Huh (album)"
Some fundamentalist types bellyached that the album cover shows Mellencamp along with angels that have "demonic" features (horns and pointed tails and such).
Submitted by: Buckeye Chuck
"Play Guitar"
The song got plenty of airplay but sometimes the line where Mellencamp says "Forget all about that macho sh*t and learn how to play guitar!" is edit by having acymbal crash dubbed in to mask the dirty word.
Submitted by: Clash City Rocker

"Soul Godfather Imitation"
When I saw John "Hoosier" Mellencamp live at the Palace Theater last year at the end of the main set (as in before the encores) an assistant placed a bluish-purple cape-cloak on John's shoulders a la James Brown. Note that in his video for the 1981 hit "Ain't Even Done With the Night" he also wears a cape and keeps "escaping" from it so he could grab the mic stand and sing another verse, also in emulation of Soul Brother Number One.
Submitted by: Buckeye Scott
"keeps on changing names"
Look at his discography. He's changed his stage so many times! His first few albums (from 1976 -1979) were released under the moniker "Johnny Cougar". His 1979 album was titled "John Cougar" and that's the name he used on his 1980 and 1982 albums. In early 1983 I read in a newspaper that he was up for Grammy awards and he was listed as "John Mellencamp Cougar" after he said he wanted his next album released under his real name. That happened later that year when the "Uh-Huh" album came out under the name "john Cougar Mellencamp". For the rest of the 80s his albums were under that name despite rumors that he'd dropped the "Cougar" altogether. That didn't occur until he put out a new release in late 1991. At the same time he has occasionally used the name "Lil Bastard" to denote himself in production credits. That name was used by another famous Hoosier (James Dean) for his car. Also, here in the Buckeye State the DJs of Q-FM-96 FM often refer to John with the affectionate nicknames "John Hoosier Mellencamp" and "John Hoosier Melon Head". He's got a huge fan base in the MidWest.
Submitted by: Ohio Buckeye
"Jack and Diane"
During the late summer and early fall of 1982 "Jack and Diane" was on top of the Billboard Hot 100 chart. Me and my younger sister were watching a "Three's Company" episode during autumn 82 and main character Jack Tripper was dating a girl named (drumroll, please) - Diane!
Submitted by: Guess What?

"Rodeo Clown"
It's on the 2007 album "Freedom's Road". Right after the last listed track, "Heaven Is a Lonely Place" there's silence for a few minutes then the unlisted track "Rodeo Clown" comes on. It's a good slice of Dubya-bashing rock music. The moronic crap Mellencamp had to endure when he released his rewrite of Woody Guthrie's "To Washington" a few years before probably is why this cut is hidden. Mellencamp keeps on fighting authority, especially when it is criminal itself.
Submitted by: GWB Is The Worst Prez Ever!

"Lovin' Mother Fo' Ya"
On this song from the album "Uh-Huh", you can hear him say "What the f***?!" at the very beginning.
Submitted by: Rocky

"Uh-Huh"
Some fuddie-duddies complained about the cover art because it shows the rough-and-tumble longhaired rebel type Hoosier surrounded by angelic beings with satanic features (pointed tails and devil horns). Are they angels or demons? Hey fellas, just listen to the music.
Submitted by: Buckeye Skywalker

Nothin Matters & What If It Did 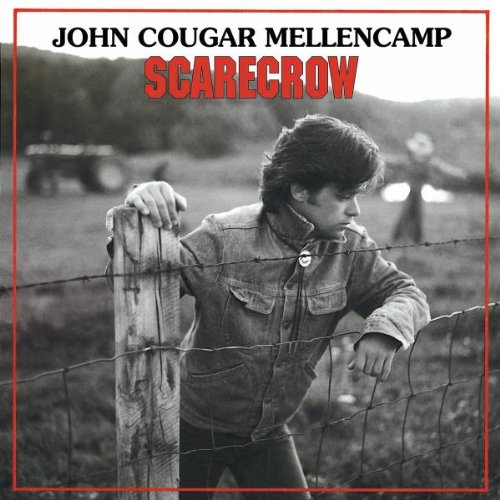