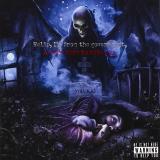 "Blinded In Chains"
And in another part, in the background, you can hear someone say "I see another side in you but there's not much more I can do from on the outside looking in your government is listenin' to push you on the story of immortal father mortal son give them your mind and all your wealth the cycle will rebirth itself"
Submitted by: Travis
"Blinded In Chains"
In the background of one part you can hear someone say "And as clowns you follow suit behind the blood between the red and white and blue but it's too deep for you to see and everyone eventually will take the step cause it's in sight you take the left I'll take the right I feel the hate you've built for me and I say pay attention baby"
Submitted by: Travis

The series "Game Of Thrones"
One of the themes of the show is revenge.
Submitted by: Opie M.

"Chapter Four"
Where is chapter 1-3?
Submitted by: Travis Warmness on the Soul