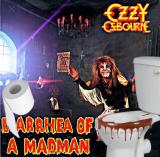 "Bark On Earth" originally "Back On Earth"
So far only planet known to have that sound.
Peter
"Flying Hugh Again" originally "Flying High Again"
Hugh rode in an airplane for a second time.
Calvin Amari
"Crap Door" originally "Trap Door"
Remind me not to go in there.
Peter
"I Don't Snow" originally "I Don't Know"
Peter
"Crazy Trail" originally "Crazy Train"
Lynne O'Leahy-Cassid

"Crazy Way (The Fart Song)" by Professor Incubus
a parody of "Crazy Train" by Ozzy Osbourne
The idea for this song has been going though by head for quite some time and I just got around to writing and recording it recently. Just say no to fava beans, lentil soup and broccoli cheese souffle or they'll be blowin' out your ass in a crazy way!
Soundclick: (Soundclick)
(Leave a Comment)

There are additional Ozzy Osbourne Combined Groups that haven't been done yet available.

Those that can't swim who

Drown in their pools
Original Lyrics:
I've listened to preachers

I've watched all the dropouts

Who make their own rules
Submitted by: Ed Ehren
"Mr. Crowley"
Better Lyrics:
Oh, Mr. Johnson, why would you end up dead?
Original Lyrics:
Oh, Mr. Crowley, did you talk to the dead?
Submitted by: Darius Whitehead
"Crazy Train"
Better Lyrics:
ITS MY EYE! hahaha!
eye eye eye...
Lazy, thats how my eye is.
It rambles, and wanders, looking at things.
Maybe, it's not too late,
to get it corrected, oh wouldnt that be great...
Lazy eye keeps crossing, driving you insane,
I'm lookin all around with my lazy eye.
I'm lookin all around with my lazy eye.
Original Lyrics:
All aboard, Ha ha ha ha ha ha haaaa

Crazy, but that's how it goes
Millions of people living as foes
Maybe it's not too late
To learn how to love
And forget how to hate

"Suicide Solution"
Not a direct ban, but because of the aforementioned events surrounding the tune, much of Ozzy's music was pulled from rotation from several radio stations during the time period, 1985 to 1987. In 1985, the parents of John McCullom sue Ozzy Osbourne, claiming that this song "aided, or advised, or encouraged" their son to commit suicide. In 1987, the judge in the case decides that overt lyrics are protected speech and that the evidence is insufficient to connect the song to the suicide.
Submitted by: Peter

"Dot In The Shark" originally "Shot In The Dark"
Submitted by: Regina Olsen

Bob runs on zoos on subs. Submitted by: hamburger456
Can somebody tell me what the hell that means?

"Suicide Solution"
Ozzy claimed he had originally wrote this song in memory of AC/DC singer Bon Scott, who died of hypothermia in his car after drinking heavily the night earlier. In 1984, a teenager only known as John M. shot himself in the head while listening to the song. John M.'s parents blamed the song for their son's death They hired attorney Thomas Anderson and sued Ozzy for wrongful death. The judge ruled in Ozzy's favor, citing First Amendment rights.
Submitted by: Rocky

"Robbery"
Ozzy recalled in his memoirs how he got into trouble during his years as a frustrated teenager such as when he attempted to rob a clothes shop; his father refused to pay the fine as punishment to his son and as a result Osbourne spent over a month at Winson Green Prison.
Submitted by: Maryellen Larkin
"See Below"
In 1982 he was arrested in Texas for lifting up his dress and urinating on the Alamo, and two years later he was arrested again for public intoxication. In 1989 he was violently drunk and attempted to murder his wife Sharon.
Submitted by: Travis
"Defacing A National Monument"
Stemming from an incident in which Ozzy urinated on the Alamo. This incident was enough to get him banned from the state of Texas.
Submitted by: Celeste

"Dyslexia"
This accounted for him dropping out of school in his teens as said condition sadly wasn't treated as well as it is today. It also necessitated him to have his memoirs written on his behalf by a co-author.
Submitted by: Maryellen Larkin
"Bipolar Disorder"
Submitted by: TBuck

"Crazy Train"
In the end, where it sounds like a baby cooing, it's actually one of the studio crew saying "eggs" with his voice sped up. The story is that Mr. Osbourne asked the bloke what he ate for breakfast. The crewman said "eggs", and they warped the voice and tacked it on the end of the song.
Submitted by: Ricky

"Celebrating a Solar Eclipse"
In Cartersville, Illinois there was the Moonstock heavy metal festival. This region was in the path of totality for the solar eclipse of August 21, 2017. Moments before the moon started to eclipse the sun Ozzy got on stage and he and his band kicked off his hit 'Bark At the Moon'. During that song the sun got totally eclipsed by the moon and the daytime turned into 'night'. By the time the song ended the sun 'reappeared' and daylight returned. This was all preplanned ahead of eclipse totality time. A landmark of heavy metal history, rock'n'roll history, astronomy history, Ozzy's checkered life and more. I wish I was there but where I was the sun was 90% eclipsed and I ain't complaining on that.
Submitted by: Astronomy Dominer
"Having his daughters on an out-take reel with him"
Ozzy Osbourne was shooting a commercial back in 1984 with his two daughters Aimee and Kelly. The first time that they did this one of the kids puked on him. The second time they did it Aimee sneezed on his hand.

Ozzy said "Oh my god! Why? Why can't you be more like the Osmonds?
Submitted by: Celeste
"Urinating On The Alamo"
Ozzy Osbourne was arrested and charged with defacing a national monument. This incident was enough to get him banned from the state of Texas
Submitted by: Celeste
"His Potty Mouth"
Ozzy is also known for his potty mouth. In his reality show The Osbournes there were more bleeps than any other show in MTV's history. And people now know where Kelly and Jack get their potty mouths.
Submitted by: Celeste

"The Wizard of Oz" movie
Look at the names
Submitted by: Rock'n'Roll Wizzard in the Blizzard
Australia Tourism
Australia is sometimes nicknamed "Oz"
Submitted by: Koala Bear

Diary of a Madman

Speak of the Devil