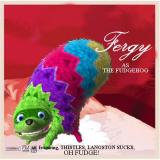 There are additional Fergie song titles with a letter added available.

There are additional Fergie song titles with a letter changed available.

"Bladder Control Problem"
A photograph once revealed that she had wet her pants on stage during a concert.
Submitted by: Ecica Tetralix

"Wetting herself in concert"
Fergie had an accident during a concert in San Diego. While she originally denied it, she eventually confessed
Submitted by: Danny
"Hypnotherapy and Crystal Meths use"
Before Fergie was a Black Eyed Peas member, she had poor run as a child actress for Wild Orchid from 1991-2001. After the 3rd album canceled release, she left the group and became addicted to crystal meths.

She uses hypnotherapy to beat her crytal meth addiction and she still use that today. She said on Times magazine that quitting crystal meth is "the hardest boyfriend I ever had to break up with".
Submitted by: Rocky Mak

Depends
In at least one concert, she could've used them.
Submitted by: Alanis More Upset