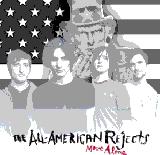 "Mow the Lawn" by Macaroni Man
a parody of "Move Along" by All-American Rejects
Originally published video on Jul 1, 2011, this has become one of my more hated videos for some reason (*cough*, bad singing). Has accumulated 2015 views at the time of submitting.
YouTube: (wmv)
(Leave a Comment)

There are additional All-American Rejects Combined Groups that haven't been done yet available.