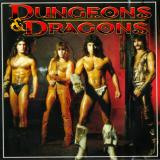 There are additional Manowar song titles with a letter changed available.

There are additional Manowar Combined Groups that haven't been done yet available.

"Achilles, Agony and Ecstasy" Length: 28+ mins
very long, I listen to it every once and a while, often not getting past 20 min. Listen to the whole song is actually really good though
Submitted by: Sens Fan

"Epic fantasy-based songs"
Most of the band's lyrics deal with fantasy and mythology.
Submitted by: GlamRockNinjaLord Hell of Steel: The Best of Manowar The Triumph of Steel