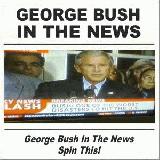 "Menier's Disease"
He announced that a tour was canceled in 2018 because he couldn't hear well enough to sing.
Submitted by: Celeste