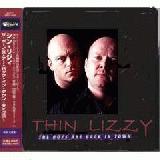 "The Boys are Back in Towm"
Better Lyrics:
The G20's still around
(And trouble's goin' 'round)
Tens of thousands making sound
(Loosed water cannons on them)

"Jail Break" originally "Jailbreak"
As in getting a break from jail.
Submitted by: Opie M.

Clinics for the anorexic or bulimic
Submitted by: Travis Vagabonds of the Western World