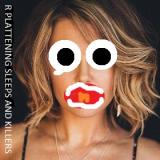 Rachel Platter
Rachel Platten combined with The Platters
If we had change-a-letter for performer names, the soloist's name could be changed to this.
Submitted By: nally