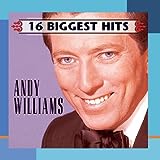 16 Biggest Hits album at Amazon.com
Andy Williams', "It's The Most Wonderful Time Of The Year"
The Lyrics:
There'll be much mistletoe-ing
And hearts will be glowing
When loved ones are near.
Why:
Mistletoe is not a verb.
Submitted by: Telmy (pronounced 'tell me')
Andy Williams', "The Most Wonderful Time Of The Year"
The Lyrics:
With the kids jingle belling and everyone telling
You, "Be of good cheer".
Why:
I've checked a dictionary, and it IS possible for the word "bell" to be a verb occasionally. It just isn't a verb with a meaning anywhere closely resembling its intended implications in these lyrics. It can be a transitive verb, with a meaning of "to put a bell on", as for example, putting a cowbell on a cow could be called "belling a cow". Transitive verbs are sometimes used with implied but unstated direct objects. But in that case the usage will generally be in a context that makes clear what the unstated direct object is. And in this case there is no clearly implied direct object to make it clear what animals or other things these kids could be putting bells on. So more likely it should be considered an intransitive verb. But the possible meaning of "bell" as an intransitive verb is indicated to be "flaring out into the shape of a bell". But of course these lyrics could hardly imply that the kids are morphing into a bell shape. Of course, since it says "jingle belling", the grammatically proper meaning of the verb "bell" as so modified could be argued to lose the implication of flaring out, but instead mean turning into the shape of a jingle bell. But either way, it could only be a ludicrous gaffe for the song to come across as saying that the kids are morphing into the shape of bells, jingle bells or otherwise!
Submitted by: Penelope Beckinsale