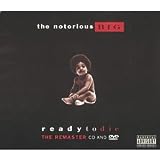 The Notorious BIG: Ready to Die: The Remaster CD and DVD album at Amazon.com
The Notorious B.I.G.'s, "Hypnotize"
The Misheard Lyrics:
Never do, never choose you, Blue's Clues, too
The Real Lyrics:
Never lose, never choose to, bruise crews who
The Story: I could have sworn the late Biggie Smalls was rapping references to Pokemon and Blue's Clues, both up and coming TV shows at the time this song came out soon after he was murdered. Although Pokemon was a huge hit in Japan, it didn't come to North America until 1998. But Pokemon was a video game franchise from the beginning. - Submitted by: Cody Finke
The Notorious B.I.G.'s, "It's All About the Benjamins"
The Misheard Lyrics:
It's all about the Entemanns, baby!
The Real Lyrics:
It's all about the Benjamins, baby.
The Story: I heard the song on the radio several times and would always sing along. He was a big guy & so I assumed it was his tribute to his favorite snackfood. - Submitted by: Josie VanMoore