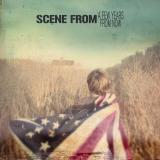 Geyser Rinsed originally "Rise Against"
Rinsing a geyser could hardly change it much.
Submitted by: Doug Graves Siren Song of the Counter Culture