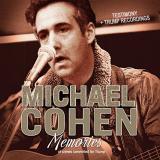 "Death of a Ladies' Man" Length: 9:19
This is probably the only Leonrad Cohen song this long, it is 2 minutes and 59 seconds shorter than Desolation Row by Bob Dylan (one of Leonard Cohen's idols).
Submitted by: Feurzeug

New Skin for the Old Ceremony

Songs of Love and Hate The Songs of Leonard Cohen