These are lyrics by Flight of the Conchords that we think are kind of funny.

Funniest Lyrics, Flight of the Conchords 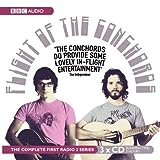