"All That I Need"

I've never been to a will reading, so I can't claim with confidence that there's always that one asshole who just wants stuff, but let's pretend that that's a thing so that this parody has a good intro comment, okay?
Sure you're not gonna go on longer, bro?
Waitin' here patiently cause I should show
In that list somewhere, I'm kinda the first in line
Sat through your ass blabbin' while ev'ryone cried
Do you take me for a fool?
I know I've got stuff that's been left by that tool
I'm owed way more than you dorks
Know I come off as heartless, but I want my score

Only reason I came here was to claim
My fair share of Dad's stuff cause I could gain
Lots of cash once it's sold, know you lot would hold
Onto ev'ry frame, keep 'em safe in a vault
So sentimental a plan
I could almost throw up from this influx of sap
No drug fix or debts to be paid
Just want to spend my life with no debt fear, okay?

My original title was "Not in the Deed", but I realised that "deed" isn't really a synonym for "will". Presuming that that's what I meant when I came up with the title, sometimes these things happen so much in advance that I can't remember what track my train of thought was on at the time.
Previous Parody Added to the Site | Next Parody Added to the Site

The address of this page is: http://www.amiright.com/parody/90s/boyzone3.shtml For help, see the examples of how to link to this page. Different Beat (+ Picture of You) 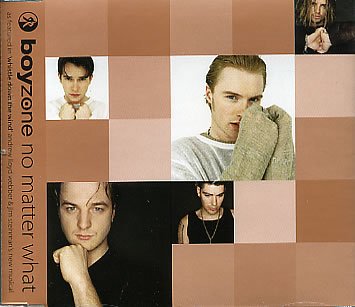 No Matter What Pt. 1