Hey, girl, get set to
Rise to where god will fete you.
You'll find him way up there--
Ain't no bus, ain't no car takes you to fine shores
Of milk and honey.
Sinners below engulfed in firestorms.

So you think you're raptured,
But it seems you've been captured
By a guy name Lu'.
It was Charon who, girl, took you to
A place where you'll find
His forked tail's gonna hook in you.

He ain't beneficent,
In fact, kinda malignant.
"Now you're in my place. . .
Got no call from your deity.
You're goin' with the forked crew.
Girl, it's time to face Beelzebub!"

The address of this page is: http://www.amiright.com/parody/70s/jaggerz1.shtml For help, see the examples of how to link to this page. 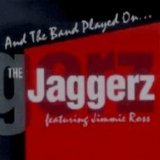