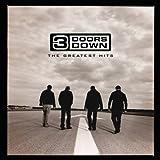 Greatest Hits album at Amazon.com
Three Doors Down's, "Be Like That"
The Misheard Lyrics:
F*** me like that.
The Real Lyrics:
I can be like that.
The Story: I was driving in my car with my mother. We were listening to the radio and the song came on. It was fairly new, so I turned it up because I had never heard it. As it reached the chorus, my mother's eyes got big. She said to me, 'Did that song just say the 'F' word on the radio?' I thought it did too. Sure enough, it fired back up again and I was awed. But later, we found the real lyrics and still laugh about it. - Submitted by: Ryann Fradenburgh
Three Doors Down's, "Down Poison"
The Misheard Lyrics:
I've dreamed about this, 16 days away.
Now you're here, and my head lays... beside your body.
You put your hand on mine.
New poison,
Spinnin' round my mind.
The Real Lyrics:
I've dreamed about this
Sixteen days away.
Now you're here
And my head lays
Beside your body,
Pillowed under mine.
You were poison,
Spinning 'round my mind.
The Story: I've just always thought this was what it was and I'm 30 so I've been listening to this song for some time... Now that I think about that not being right I wonder where I got that from... But I still don't hear what it's supposed to be and I've checked the actual lyrics on 6 different well known lyric sites. My way still makes more sense to me. :-) - Submitted by: Jamie
Three Doors Down's, "When I'm Gone"
The Misheard Lyrics:
There's another world in sodomy
That you may never see.
The Real Lyrics:
There's another world inside of me
That you may never see.
The Story: I've ruined this song for many of my friends when I asked them if what I thought was really what Three Doors Down was singing. They now can't hear it any other way. - Submitted by: Matthew

There are more Three Doors Down misheard lyrics available.