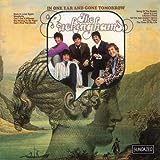 In One Ear & Gone Tomorrow album at Amazon.com
The Buckinghams', "Don't You Care?"
The Misheard Lyrics:
Don't you dare.
The Real Lyrics:
Don't you care?
The Story: I always used to think this song contained a subtle threat, like "don't you dare cheat on me, or else". That is, until an FM oldies station went on in my town, where it sounded clear enough to make out the 'c' sound in 'care'. 'Care' sounded like 'dare' when the song was played on AM. - Submitted by: Draggs
The Buckinghams', "Kind Of A Drag"
The Misheard Lyrics:
Canada Dry, when you baby says goodbye.
The Real Lyrics:
Kind of a drag, when you baby says goodbye.
The Story: The first time I heard this on the radio, I thought it was a soft drink commercial. - Submitted by: Victor
The Buckinghams', "Mercy, Mercy, Mercy"
The Misheard Lyrics:
Sure is better, than that other fellow.
The Real Lyrics:
Sure is mellow, glad that I'm her fellow.
The Story: I was singing the song in the car to my wife, and she thought I was goofing with the lyrics. Told her those were the lyrics, and she said to go home and check the Internet. Turned out her version was wrong too, although they made more sense than mine. - Submitted by: Howard Hurowitz