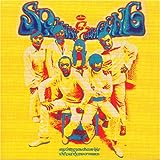 Without Rhyme Or Reason album at Amazon.com
Spanky And Our Gang's, "Lazy Day"
The Misheard Lyrics:
Flowers bloom when surfers shave in the snow.
or
Flowers bloom with girls savin' the show.
The Real Lyrics:
Flowers bloomin', squirrels sayin' hello.
The Story: I'd heard this song a lot of times before, without paying close attention to the words. Then yesterday it played on my car radio when I was in an area where the reception seemed better then usual. That made me pay more attention to the words, but even so, the lyrics to the above line remained a mystery. The misheard lyrics are my two best guesses as to what it sounded like. But since neither made much sense in the context of the song, I was suspicious. So I checked a lyrics site and found the correct lyrics. - Submitted by: Ava Murphy
Spanky And Our Gang's, "Sunday Will Never Be The Same"
The Misheard Lyrics:
Sunday afternoons that made me feel old woman's sides.
The Real Lyrics:
Sunny afternoons that made me feel so warm inside.
The Story: Not being born yet when this song was new, i first heard it on an 'oldies' station. I kind of did a 'double take' with this line, asking "What? What is she doing feeling old women's sides?" I started listening to the song closer, hoping that line would be repeated so I might find out what it really says (surely not what I thought I heard, I was thinking). I didn't hear it repeated that time. I don't believe it gets repeated at all in the song> At any rate, when it first caught my attention, I was hearing it for the last time in that particular playing of the song. I listened more to the station, hoping to hear the song repeated. It must have been weeks or months later, but I finally heard the song played again. Listening closely, I was pretty sure it said, 'Sunday afternoons that made me feel so warm inside', an altogether more feasible hearing! Finally I mentioned it to a friend, who happens to have the song on a CD. He played it for me and pointed out a further correction, that it seems in all likelihood to say 'sunny afternoons' rather than 'sunday afternoons'. - Submitted by: Penny Olivia Tyler

There are more Spanky And Our Gang misheard lyrics available.