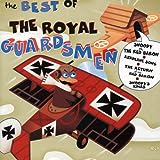 Best of the Royal Guardsmen album at Amazon.com
Royal Guardsmen's, "Snoopy Vs. The Red Baron"
The Misheard Lyrics:
Even died tryin' to end that spree.
The Real Lyrics:
Eighty men died tryin' to end that spree.
The Story: Actually, the following applies to all misheard lyrics to this song in which the number 80 is misheard. The last syllable in 'eighty' is very hard to catch, causing these errors. Nowadays, when I sing it, that syllable can be heard. - Submitted by: Jeffrey Hope