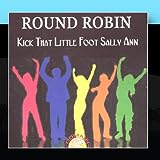 There are more Round Robin misheard lyrics available.