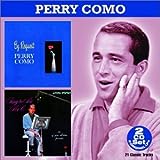 By Request / Sing to Me Mr C album at Amazon.com
Perry Como's, "It's Impossible"
The Misheard Lyrics:
Can the ocean keep the Russians from our shore?
The Real Lyrics:
Can the ocean keep from rushing to the shore?
The Story: It was the height of the Cold War. I did not realize my mother misheard the lyrics until I heard her exclaim, "My God! Do we fear the 'commies' so much that our love songs even worry about them?" I about died laughing! - Submitted by: Ron Ghosh
Perry Como's, "It's Impossible"
The Misheard Lyrics:
If I had you, could I ever want four more?
The Real Lyrics:
If I had you, could I ever want for more?
The Story: I first heard this as a child when I wasn't yet acquainted with the phrase 'want for more'. So the only way I could hear it was 'could I ever want four more?'. - Submitted by: Darlene
Perry Como's, "Round And Round"
The Misheard Lyrics:
Roulette wheel, it goes 'round and 'round.
The Real Lyrics:
Find a wheel and it goes round, round, round.
The Story: For years I thought the title of this song was 'Roulette' and was always puzzled why I could never find it in any song listings. I thought it was a song about a lucky gambler and had no idea it was an allegorical tune about finding one's true love in a crazily spinning romantic daze. - Submitted by: Joseph Talnagi
Perry Como's, "Seattle"
The Misheard Lyrics:
Like a litle child, throwing up free and wild, in Seattle
The Real Lyrics:
Like a little child, growing up free and wild, In Seattle
The Story: I am a Disc Jockey at an oldies radio station, and I noticed this as I was putting on my headphones to talk on the air, right after playing this record. I started laughing so hard, no one (including myself) could understand what the hell I was saying. - Submitted by: Dan Fletcher