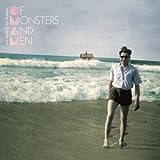 My Head Is an Animal album at Amazon.com
Of Monsters and Men's, "Dirty Paws"
The Misheard Lyrics:
My hand is an atom bomb.
The Real Lyrics:
My head is an animal.
The Story: I was having fun eating at Taco Bell, when I heard this song come on the sound system. I thought I was kind of familiar with the song, but I wanted to know for sure, so I stayed after finishing eating to hear the entire song. Then I knew what song it was so I was sure I could look up its lyrics online. I'd heard this line early in the song, and could make nothing out of it at the time other than how it sounded like "My hand is an atom bomb." When I got home I looked up the lyrics and found this line to be somewhat less menacing than what I'd heard, but no less mysterious or nonsensical! - Submitted by: Karen Smith
Of Monsters and Men's, "Little Talks"
The Misheard Lyrics:
‘Cause thought the truth may parry this, sh*t will carry on,
(Bali’s/ballies) safe to show.
The Real Lyrics:
Though the truth may vary
This ship will carry our
Bodies safe to shore
The Story: When I said what I thought it was out loud, my brother started laughing, because he thought “ballies safe to show” was a sexual reference. - Submitted by: Edward Keller
Of Monsters and Men's, "Silhouttes"
The Misheard Lyrics:
Im already dead
The Real Lyrics:
Im already there
The Story: Always heard like "I already dead" and always sang It as such until I looked up the actual lyrics - Submitted by: Aloys Schikelgruber

There are more Of Monsters and Men misheard lyrics available.