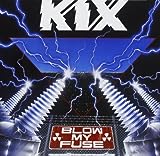 Blow My Fuse album at Amazon.com
Kix's, "Don't Close Your Eyes"
The Misheard Lyrics:
Don't close your eyes.
Don't close your eyes.
Don't say your last lap of bike.
No one can be to hold you.
The Real Lyrics:
Don't close your eyes.
Don't close your eyes.
Don't sing your last lullaby.
No one there to hold you.
The Story: Just some hours later, I posting another misheard lyrics of songs. This time, it would be "Don't Close Your Eyes". In the lyrical content of this song, how Steve Whiteman and friends like MotoGP or Formula 1 while in the original line does not say that. That's funny if Steve Whiteman and friends was drivers of MotoGP or Formula 1? About this song: This song was about how their friends don't ended their life. Because, it's a power ballad contradiction with end life. Released as a single as track #4 on their fourth studio album, "Blow My Fuse", released in September 1988, it would be their only major hit with reaching #11 on Billboard's Pop Chart. It was written by Bob Halligan Jr., John Palumbo, and Donnie Purnell. "Blow My Fuse" was not just includes this power ballad, but also includes their hard rock inspired track, "Cold Blood". But, again, congrats for Steve Whiteman and friends who make "Don't Close Your Eyes" entering major chart like Billboard's Pop Chart. Thanks. - Submitted by: Wisnu Aji