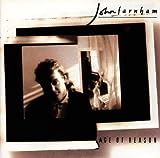 Age of Reason album at Amazon.com
John Farnham's, "You're the Voice"
The Misheard Lyrics:
You're the voice, try and understand.
Make it work and make it clear.
Remember sit in sailor.
Remember liquid feel.
The Real Lyrics:
You're the voice, try and understand it.
Make a noise and make it clear.
We're not gonna sit in silence.
We're not gonna live with fear.
The Story: Currently I haven't heard with this song, but I know this misheard lyric. While I know he was the voice, but he was sitting in sailor and he feel with the liquid. About this song: "You're the Voice" was his only greatest hit to date. This song was topping in his native country, Australia. Not only topping in Australia, but also topping in German and Sweden. This song also a top 10 hit in the UK, Austria, and Switzerland and in Billboard's Pop Chart peaking at #82. Make him one-hit wonder around the world and known as an international fame. - Submitted by: Wisnu Aji