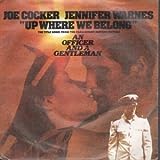 UP WHERE WE BELONG 7 INCH (7" VINYL 45) UK ISLAND 1982 album at Amazon.com
Joe Cocker And Jennifer Warnes', "Up Where We Belong"
The Misheard Lyrics:
The little zup where we belong.
The Real Lyrics:
Love lifts us up where we belong.
The Story: I had just moved to the US and was finding out that British English and American English were two different things, so when I heard 'zup', I just assumed it was a word I was unfamiliar with. From its context, I decided that it was a mountain cabin built and pictured it in my mind. I was very disappointed to find out zup wasn't a word, because it sounded exactly like the sort of place I wanted to live. - Submitted by: Teresa