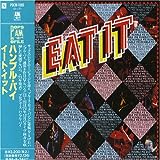 Eat It album at Amazon.com
Humble Pie's, "Hot n Nasty"
The Misheard Lyrics:
Hey Joe, don't forget to shake it
While you're zipping up that thing
The Real Lyrics:
Hey Joe, don't forget to shake it
While you sleepin' on that bed
The Story: I could never understand what Steve Marriott was singing in the days before the Internet. After listening to it for a while as an MP3, instead of on vinyl, I decided he was telling a guy in the men's room to shake his private part off before zipping up his pants - although it seemed improbable. But the real lyrics don't make any sense either. - Submitted by: chlyn