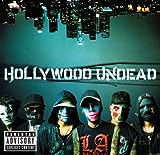 Swan Songs album at Amazon.com
Hollywood Undead's, "S.C.A.V.A"
The Misheard Lyrics:
Now with pancakes it's all over
The Real Lyrics:
Now repent 'cause it's all over
The Story: I listened to the song and I (due to English not being my first language) understood these lyrics I found quite funny - Submitted by: Lesas
Hollywood Undead's, "Undead"
The Misheard Lyrics:
Signed, Charlie Sheen
The Real Lyrics:
Signed, Charlie Scene
The Story: I heard the song in Madden NFL 09 and didn't know that "Charlie Scene" was a member of the band...so I thought they directly referenced the former "Two and a Half Men" star. - Submitted by: JeReMy