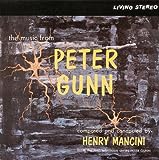 The Music from Peter Gunn (1958-1961 TV Series) album at Amazon.com
Henry Mancini's, "Moon River"
The Misheard Lyrics:
We're after the same rame hozend.
The Real Lyrics:
We're after the same rainbow's end.
The Story: When I was a kid and found many song lyrics hard to understand, I thought the words to this song were refreshingly clear, for the most part. But even herein, two phrases had me baffled. They sounded like 'rame hozend' and 'Huckleberry friend'. I listened over and over to see if possibly I was missing something. But back then I persistently failed to make out anything different. I finally decided those must be the correct lyrics, and that 'rame hozend' and 'Huckleberry friend' were two real things that I had not yet learned about at the time. After growing up, I found it easy to understand 'rainbow's end'. But 'Huckleberry friend' turns out to be the real lyrics, even though what a Huckleberry friend might be remains every bit as much an enigma to me as 'rame hozend' ever was. - Submitted by: Jessica Davis