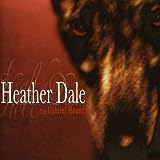 Gabriel Hounds album at Amazon.com
Heather Dale's, "Sedna"
The Misheard Lyrics:
Sedna on the Dee,
The cold forgotten Dee.
The Real Lyrics:
Sedna roamed the deep,
The cold forgotten deep.
The Story: I saw a posting on amiright.com for Heather Dale. Not knowing anything about her, I checked her artist summary on amiright.com, where I saw only anagrams of her name posted. Since that told me scarcely anything about her, I looked up more about her, including her songs, elsewhere. The song Sedna caught my interest, as I wondered if it were connected with the dwarf planet of that name. I played it on youtube, finding the lyrics very hard to understand, so I still didn't know for sure what the song is about. But what little I could make out seems to be more about the Inuit goddess for whom the dwarf planet is named than for the dwarf planet. So I checked a lyrics site to see if I could find out the real lyrics. Somebody heard them well enough to present a coherent version on that site, revealing the above correction to my mishearing. Furthermore, they tell a story common to the various versions of the mythology of Sedna, and make no reference to the dwarf planet named for her. - Submitted by: Karen Smith