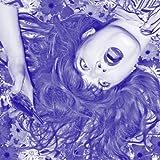 There are more Florence and the Machine misheard lyrics available.