Misheard Song Lyrics -> Stories -> Cast of 'Phantom Of The Opera' 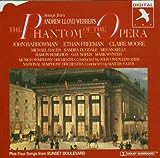 There are more Cast of 'Phantom Of The Opera' misheard lyrics available.