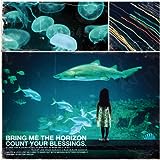 Count Your Blessings album at Amazon.com
Bring Me the Horizon's, "Blacklist"
The Misheard Lyrics:
But you don't miss a bastard when you're buried in f**king crocs
The Real Lyrics:
But you don't miss a bastard when you're bearing his f**king cross
The Story: It made me wonder why someone would be buried in atrocious footwear. - Submitted by: Jake
Bring Me the Horizon's, "Shadow Moses"
The Misheard Lyrics:
Rise from the Danube, see!
Secrets of playtime they look to the grass.
The Real Lyrics:
Rise from the dead, you say
Secrets don't sleep till they're took to the grave
The Story: "Sandpit turtle" had already become a meme by this point. I thought I heard "Secrets of playtime" while watching a video on YouTube someone made of a Little Tikes "sandpit turtle" commercial someone made set to the song, Shadow Moses. I had to double check the actual lyrics. - Submitted by: Ryan Miller

There are more Bring Me the Horizon misheard lyrics available.