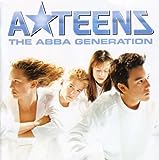 Abba Generation album at Amazon.com
A*Teens', "Floorfiller"
The Misheard Lyrics:
Prophylac!
or
Phlophilla
The Real Lyrics:
Floorfiller
The Story: When I went to see the A*Teens in a concert in New York City (Times Square), I thought they were singing about some weird plant called a Phlophilla. It kind of made me wonder what plants they've been encountering. - Submitted by: Joseph
A*Teens', "Upside Down"
The Misheard Lyrics:
Oh dear, she says to concentrate
So what, her name is Beeda the Great
As king and queen, we’ll have to wait
'Cause I don't have forever
The Real Lyrics:
My teacher says to concentrate
So what; his name was Peter the Great
The kings and queens will have to wait
'Cause I don't have forever
The Story: I thought “Beeda the Great” was an sarcastic nickname the male singer was using to refer to an authority figure (like his mom or his teacher) whom he couldn’t stand. I also thought the singers were imagining themselves as royalty in the future, rather than talking about actual historical royals. - Submitted by: Hu’s On First