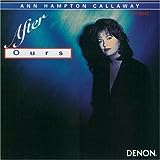 After Ours album at Amazon.com
Ann Hampton's, "The Nanny Named Fran (Theme song from The Nanny)"
The Misheard Lyrics:
The kids are actually smiling, szechuan-nally
The Real Lyrics:
The kids are actually smiling, such joie de vivre
The Story: Watching The Nanny late night on TV land, eating Chinese take out, misheard a French lyric for a Chinese one. - Submitted by: Derek Winters