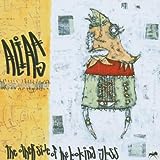 The Other Side of the Looking Glass album at Amazon.com
Alias', "More Than Words Can Say"
The Misheard Lyrics:
It's Steelheart, at 6 o'clock in the morning.
To sleep without you.
The Real Lyrics:
It's still hard, at 6 o'clock in the morning.
To sleep without you.
The Story: This is the second entry for Freddy Curci and also the first entry for his later band. If previously Gary Lewis & The Playboys mistakenly mentioning The Animals, this time, Freddy Curci mentioning another popular Rock band Steelheart. Previously, Freddy Curci get a record for a single with a singer holding a note for some seconds entering the Top 40 on major charts with his composition at that time with his band Sheriff, "When I'm with You", originally released on an album in 1982 and later released again in the end of the 1980s. Note that the full title of this song is "(I Need You Now) More Than Words Can Say", both are correct. About this song: "More Than Words Can Say" is track #8 on their self-titled debut studio album released on 18 June 1990. It was written by Steve DeMarchi and Freddy Curci. The power ballad entering Billboard's Pop Chart at #84 and reaching the Top 10 four weeks later. On 24 November 1990, it reaching #2, kept from the top spot by Mariah Carey's "Love Takes Time". It also reaching #2 on Billboard's Adult Contemporary Tracks and #13 on Billboard's Mainstream Rock Tracks. This song also topping Canada chart, their home chart. Making them their biggest hit single to date after Freddy Curci leaving Sheriff. BMI presenting the singer-songwriter Freddy Curci with the "Million-airs award" for "More Than Words Can Say". According to BMI, only 1,500 songs have achieved Million-air status (one million air plays) among the 4.5 million songs by 300,000 artists. One million performances is the equivalent of approximately 50,000 broadcast hours, or more than 5.7 years of continuous airplay. - Submitted by: Wisnu Aji