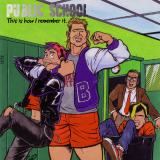 Slowly Going the Way of the Buffalo The Ever Passing Moment