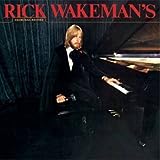 Actually, I only left twice. I left then, and then rejoined literally two years later for Going For The One.

All my early attempts at writing helped me to slowly develop a style and a way of writing that worked within the way I was developing as a player.

As a songwriter, I was influenced by David Bowie - a great writer. A class above everybody in so many ways. Lennon and McCartney, of course. Class stuff. David Cousins was my favorite lyricist.

But I listen to live recordings of things that I did back in the '70s and then how I've done things since. And there's no doubt about it: if I compare the two, it's like chalk and cheese.

But I'd play on everything from pop records to a lot of the glam stuff to rock stuff to classical stuff. I used to get called to do all those things, it was great.

Coming back to Yes is like never having left. Even when I have not been in the band, I have always felt part of it.

David Bowie is far and away the cleverest man I've ever worked with. Far and away. Absolute walking genius, David Bowie was, to work with. I did about 2,000 sessions in four years, and of all those sessions the person I learned more from, was David.

Even the two times that I left, I never really felt like I left the band. It's very bizarre. It's like there's sort of an umbilical cord that stretches between us spiritually.

I also like Tool, Air, Mars Volta, and Incubus. There are some great players and musicians about who are not frightened of being themselves and standing up for their music, and that gives me a great feeling of confidence for the future.

I always say that it's about breaking the rules. But the secret of breaking rules in a way that works is understanding what the rules are in the first place.

I avoid preset sounds wherever possible, and all the sounds I use I have edited.

I desperately wanted to play the piano like my dad, and when I was 5 he sent me off to piano lessons with a wonderful teacher called Mrs. Symes. I stayed with her throughout my musical piano tuition.

I have done quite a diverse amount of music, and some were not always of my choosing - although I always give it my best professional attention.

I joined Yes in July 1971. I had heard Yes live, as Strawbs had supported them at a gig in Hull. I thought they were amazing - incredibly different.

I like Toronto a lot, it's a good city. The only thing that really annoys me about Toronto is that you're turning Maple Leaf Gardens into a grocery store, which is absolutely nothing short of disgusting.

I read numerous books - loads in fact - and, as I always do when recording a historical project, immersed myself into the subject matter. I spent many hours at Henry's old homes, such as Hampton Court, and visiting the Tower of London. I read no other books during that period.

I'm always writing or playing because that is my life.

I'm not saying I went on stage drunk, but once you've gone completely clear headed, basically the music is your stimulant rather than anything else.

I've got it with Jon as well. We'll often look over and like sort of grin at each other. It's an X factor. There's an X factor that slips in and you can't define the X factor. And if you try and look at it or analyze what it is, then it'll all collapse. You just be very thankful that it's there.

I've got no objections to people who drink, and I still go down to the pub with my mates. Except I don't drink anymore.

I've got strong Christian views. I've had a huge faith all my life and I've not always been a good boy, I own up.

My earliest professional musical experiences were really as a session player, and every day was an adventure. Three sessions a day, every day, and you never knew who you would be working with until you arrived at the studio.

My faith is very private to me. It plays an important part in my life, but I do not try and throw my beliefs at others. I have tremendous respect for all faiths and beliefs, but have a deep concern that religion and faith are currently a long way apart from each other.

My life revolves around music and always will. I need to be a part of music and not an observer.

Oh yeah, I was a good drinker. Y'see, I was always a mug full of beer and skittles man, down at the pub playin' darts. The only reason I stopped drinking was because they told me... I mean, I had cirrhosis of the liver and alcoholic hepatitis. And they said: You'll die.

People like Frank Zappa were amazing for us Brits.

Regarding my favorite artists, I love Muse. I think they're sensational. I have followed them since their first album.

Sunday's were musical evenings, as we didn't have a television in the early fifties. My uncle Stan would come over and play the ukulele as well.

The family was very musical. My dad was a piano player and my mum was a singer. Purely amateur, but really good.

The interesting thing is, during the periods of time that I wasn't in this band, I always felt that I was in it anyway.

The studio is not the place to write. You need to be 75% ready when you go into the studio, and then the music can develop to the next stage.

When I die, I'll probably climb out of the coffin and play the organ at my own funeral!