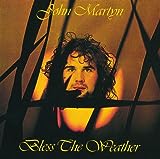 Bless the Weather album at Amazon.com

'How's your leg John?' came a shout from the audience. 'Playing havoc with my table tennis' John

He was just a little insecure boy...
- John Martyn on Paul Kossoff

I went round America doing the whole schlep, four interviews and two radio stations a day. It was like they'd tamed the pirate. I felt like I'd been nailed to the floor and I hated all that corporate insincerity. Nothing used to infuriate me more than playing a mediocre gig and finding the record company backstage going 'Fantastic!' and wanting to shake my hand.
- John Martyn (re having to do promotional rounds in America)

Please get it out!' I don't give a damn how it makes you feel ... it's what I'm about direct communication of emotion.
- John Martyn to Chris Blackwell, Island record company on their year long delay releasing Grace and Danger as Blackwell found it too depressing

He was killed by the indecent, parasitic opportunism that pervades the music business.
- John Martyn on Nick Drake.

I really don't like being referred to as a folk artist.
- John Martyn, Magnet

I often thought of faking my own death and watching the record companies fucking drum up all the shit they can...
- John Martyn - Classic Rock 6.00

I was very shy and retiring until I was 20 and then I just got the heave with Donovan and Cat Stevens and all that terribly nice rolling up joints and sitting on toadstools watching the sunlight dapple its way through the dingly dell of life's rich pattern stuff!
- John Martyn - Q 1990

I'm an original. I feel good that no-one else ever before had played the guitar like I do. That's important to me. I hope to get a whole lot better, to make a bigger contribution.
- John Martyn - Melody Maker 4.11.78

I like doing as much new stuff as I can...the thing is, there's still a demand for older material. One time, this woman came bursting into my dressing room after a show and screamed,'Seven Pounds Fifty and no fucking Solid Air ? It's a disgrace !
- John Martyn - Magnet

I love women, I must confess. They are my weakness...but then I'm a romantic. The problem is they're so beautiful aren't they? Children even more so - they genuinely are such an inspiration.
- John Martyn - NME 10/10/81

I try to balance my own favourites, the songs I really like playing, with what the audience wants to hear. It usually works out!
- John Martyn - Melody Maker 4/11/78

(on Nick Drake...) I don't want to talk about Nick. It's creepy, ghoulish and strange; this lionisation is too late when you're dead. If they'd dug him enough then, he'd still be here now.
- John Martyn - Classic Rock 6.00

Has any album cover had more spliffs rolled on it than Sundays Child? - Andy Robson

Mean, moogy and magnificent, 'One World' is the most mesmerising album I've heard this year. More complete, even, than Bowie's. Just plain better than everything else.
- Monty Smith - NME 3.12.77

Martyn's voice is still as good as ever it was. Sensual and totally irrestistible, the perfect vehicle for his simultaneously mellow and muscular material.
- Steve Clarke - NME

Woefully underrated, John Martyn ought to have been the kind of singer-guitarist who packs huge venues for weeks at a time. Instead, it's all too often a matter of 'who's he?'
- Vox, Fred Dellar

I guess I'm a little arrogant, but then anyone who's played jazz guitar and hasn't got some sort of arrogance in them is obviously a lemon!
- John Martyn - NME 22/12/84

Quite simply, the best set I've seen so far this year.
- Pete Marchetto

...there's a split in my audience; there's still a section that wants me to go back to what I was doing 10 years ago. When I first got the band I got terrible letters - the suit was the main culprit!
- John Martyn - Q, 1990

I just want to be happy. I'm fed up of being miserable ...but there's always a melancholy streak in my nature...
- John Martyn 1999

If I've been working on anything for the last six years it's becoming a better singer, and I think I'm getting there ... I don't like singers who abuse the privilege to sing... People like Morrissey just piss me off ... I like notes that go up and down, melody and harmony. Having said that, I'm very interested in hip-hop. I love all that sub-bass shit and kick drum shit. There's no reason why you can't have a really kicking track and a really sweet vocal on top. That's what I'm looking for.
- John Martyn to Guitar Mag. after 'No Little Boy'

It seems every time I put my trust in a new management set-up, it's alright for the first year or so and then they go, 'He never checks up - we're onto a good one here!'... And you find yourself in some sort of financial or contractual hole that you really shouldn't be in ... Then it takes you another two or three years to sort it out. I've staggered from one kind like that to the next all the way through my career.
- John Martyn - after parting with Permanent Records

I used to hang with everybody, but it's dangerous because you get drunk. Everyone wants to buy you a drink.
- John Martyn 1998

I never really expected any of the music business to happen, but I'm glad it did. It was a very cool thing to happen. It was a hobby for me. I used to do it to meet girls. If you had long hair and could play a guitar then you got girls. That's how I started. Then I fell in love with the music and got carried away.
- John Martyn

You can't live in the past, musically if you do, you are dead.
- John Martyn

I'm still excited by music, I wish it would go away. Working with Levon Helm and The Band was very soulful; I liked that. And I loved Andy Shepard's solo on My Creator (from On The Cobbles). I loved Paul Weller as well. That was fun.
- John Martyn

I used to come out in sweats and rashes and get terrified. It wears off after a while. But you're a fool if you don't get nervous. All I know is they'll have to take me off with a harness before I stop playing.
- John Martyn

We were doing a studio gig at the BBC. An apprentice engineer calls down on the Tannoy, 'Mr Thompson, we are getting a strange buzzing noise on the bass.' Danny puts down the bass, marches up into the control booth and says 'That son is tone and its taken me twenty years to get it.
- John Martyn annecdote concerning Danny Thompson

A lovely man but he would'nt buy you a drink if your teeth were on fire.
- John Martyn discussing his keyboard player 2000

'Hows your leg John?' Comes a shout from the audience. 'It's fine, thanks for asking...which one do you mean?'
- John Martyn's end of tour show at Liverpool's Royal court theatre, the first tour since Johns right leg was amputated below the knee in 2003

I�'ve had a very lucky life. People used to feel sorry for me because I came from a broken home, as it was called in those days. It was great. I didn�'t have any brothers and sisters to wreck my train set or annoy me. I was very happy and I was brought up by my granny and grannies are awfully good at bringing up wee boys.
- John Maryn

When I was really ill I got quarter of a million hits on the website. All wishing me well, saying we love you and get well soon, etcetera. It�'s comforting to know that. In fact, last week I had a fellow who had made a pilgrimage from Carolina to come and see me. I gave him a cup of tea and he went off very happily. It was very odd.
- John Martyn

They came to me to record an album and I thought, �'Why not?'� Since then I�'ve carried on because I�'ve had no desire to stop.
- John Martyn